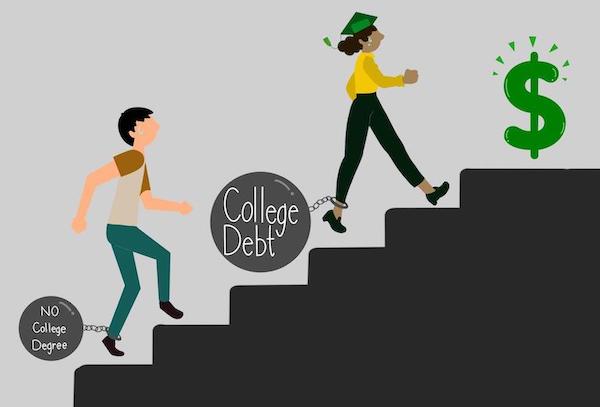 Let’s start this post with a statement. Anyone who aspires to earn a college degree should have the opportunity. In fact, a recent report from the US Census indicated the percentage of adults 25+ with a four-year degree increased to 32.1%. This represents a five-point increase over ther past 15 years. When associate degrees are added, the number swells to 42%.

However, “like to have” and “want to have” do not necessarily equate to “need to have.” Have you heard of the term “degree inflation?” There’s a growing likelihood it is affecting many careers. The impact may not be positive.

What is Degree Inflation?

The increasing demand for a four-year college degree as a requirement for jobs that historically do not require one.

Why is this an issue? Historically, middle skill jobs (i.e.: sales representative, electrician, dental hygienist, paralegal, police officer) required applicants to have a high school diploma but not a college degree. Over the last few years, many employers have begun to stipulate college degrees as a baseline education requirement for these roles. Why?

The Impact on employers

There’s a growing belief that a college degree future-proofs an employee (and their position) even if it’s not core to job deliverables. This raises an important question. Will you be satisfied with a middle skill position over the long term, given the higher aspirational expectations created by a college degree? If not, the company has to return to the hiring process far sooner (and more frequently) than planned. This is a significant time/resource commitment. Degree inflation can impact companies whether they recognize it or not.

The Impact on Employees

Degree inflation also creates multiple challenges for you as a prospective employee. First, you may feel newfound pressure to continue the education experience as a means to the desired end. The truth is not everyone is cut out to be a long-term student in the formal sense of the word. Many people thrive in traditional learning environments. Others, not so much.

More years in school also means increased financial obligations, likely in the form of student loans. This can become an unforeseen long-term burden, especially given the pay scale of most middle skill positions. Here are some disturbing facts about the state of student debt today:

Finally, there is the question of whether college educated individuals are a better fit for middle skill jobs. In an opinion piece written for the Daily Emerald (University of Oregon’s student newspaper), they said “when it comes to middle skill jobs, there is no noticeable difference between the productivity of those who graduated college and those who did not. In fact, those without a college degree on average have longer retention and are more focused than those with a bachelor’s. Employers may think they are saving time and money when they hire college educated applicants in order to avoid training employees. In reality, the same time and money is spent down the line when these employees don’t stick around.”

While earning a bachelor’s degree is an admirable goal and often fulfills an emotional need, if it’s not necessary for a specific career path, why require it? Meanwhile, make sure you have the practical, useful training (hard skills and soft skills) to set yourself up for career success.